Even in the early years of the Seattle Theatre School of Dance, Giovanni and Henriette Giglio put on very high quality recitals, fully staged with painted scenery, lighting and costuming.  And the dancers performed choreography for which they were well-trained and rehearsed.  For a number of years the recitals were held in June at the Women’s Century Club Theatre just off Broadway on Roy Street. 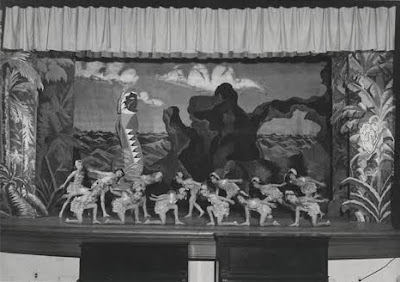 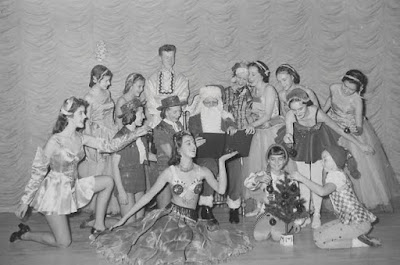 4.  Jolly Instruments, Music: George Kleinsinger 1956/57
5. Rhapsody in Blue ballet presented live on KCTS TV, 1957
6. Ladies of the Press, number from a stage show at the Catholic church in Wallingford, 1957 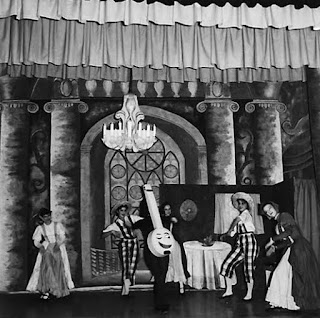 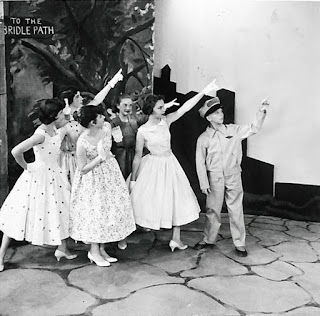 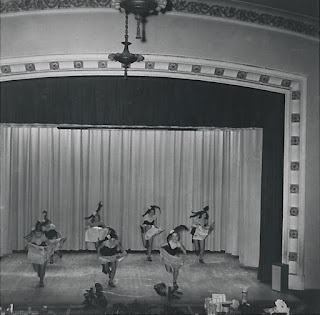 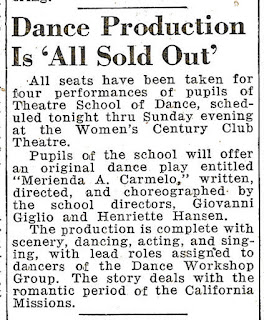 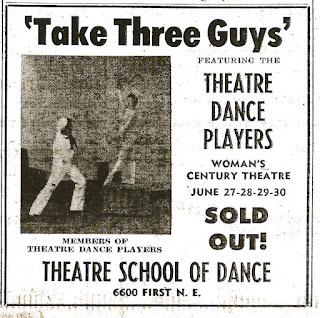 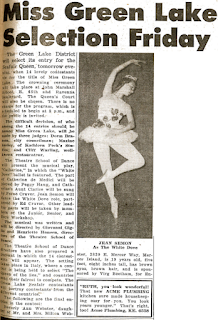 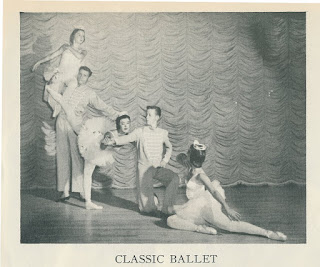 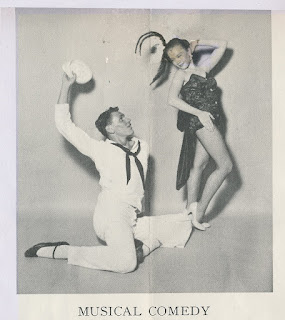 12. Giovanni Giglio to perform at Olympic Hotel, 1957
13 Flamenco dress that female members of the company wore in Spanish dances (though not all in the same color).  The costume contained 26 yards of fabric, including petticoat. 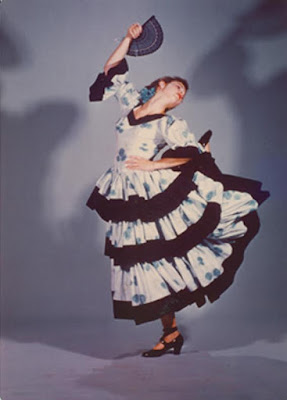 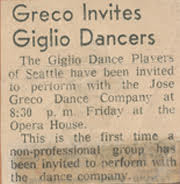 14. Jose Greco Invites the Giglio Dancers to perform as encore to his show, Seattle Opera House 1968


15. Dress rehearsal for the June recital held at the Roosevelt High School auditorium,
Giovann Giglio is on the left, 1966 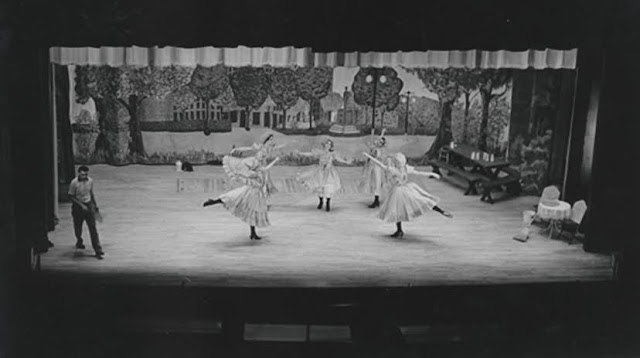 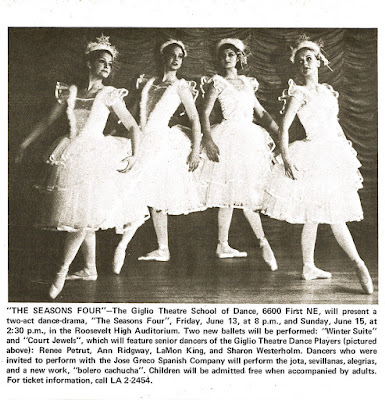 16. This photo of 4 very graceful dancers has an unintended comic effect when you observe the legs of the two center dancers: an optical illusion. 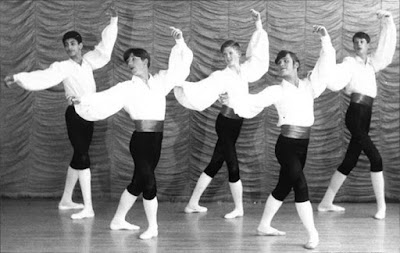 17. Members from the boys class
photo around mid 60s

Here are names of the Giglio Theatre Dance Players as taken from programs and newspaper clippings.  Please contact me for additions or corrections to this list  (See "comments" section  below) 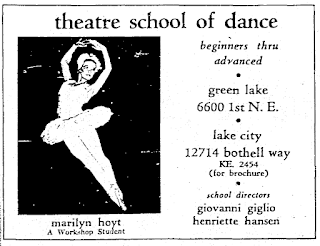 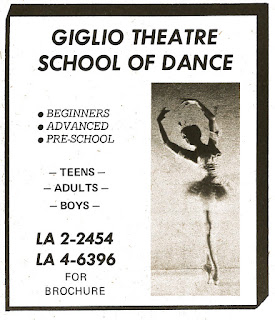 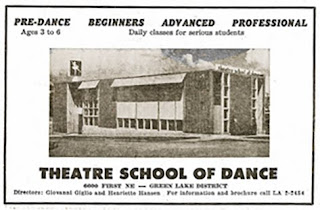 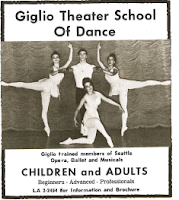 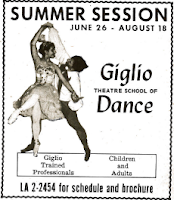 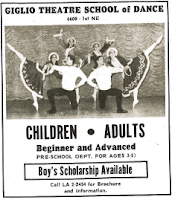 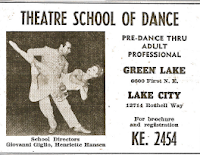 I’m seeking information through newspaper articles, programs, photographs, and personal memory stories for a history project on the Giglio dancers and school.  I need names, dates, places, and sources please.

This was a major dance school in Seattle beginning in the 1940s, established in the Green Lake District.  It was founded by Giovanni Giglio and Henriette Hansen who later became Mr. and Mrs.  They also founded the Theatre Dance Players Company in the 1950s, which performed in many local events sponsored by the Green Lake Chamber of Commerce (Christmas shows, Seafair activities, and open houses at the school).

The Theatre Dance Players also performed in classical concerts, under the musical direction of Denton Rossell, with choreography by the Giglios.  This dance troupe also performed in local musical and opera productions (Seattle Civic Opera and Seattle Opera on Wheels); and in live televised original ballets on KCTS (channel 9 in Seattle, e.g. The White Dove Ballet & the Rhapsody in Blue Ballet).  Giglio dancers performed in benefits through fraternal organizations.  And these were the dancers who performed with the Jose Greco Show when he would bring his dance company to Seattle.

The Giglios moved to Spain about 1972 at the request of Jose Greco who was a world famous flamenco dancer.  He wanted Mr. Giglio to teach for him there.  Jose Greco’s gain was Seattle’s loss.

Thus far my research has included The Green Lake Public Library and Downtown Central Library; the Green Lake Chamber of Commerce (no longer formally organized); The Museum of History and Industry (MOHAI); the Seattle Times index of newspaper articles covering the years that the Giglios were here.  I have also posted to Nextdoor – a web site covering a number of north Seattle neighborhoods including Green Lake.

I was surprised to find a little information on the Giglios on ancestry.com and more that was sent to me by a volunteer with this web site (You might need to log in to ancestry.com for access to this.) https://www.ancestry.com/boards/localities.northam.usa.states.washington.counties.king/7545.1/mb.ashx

The following book contains a photo of the Giglio school and some information: Seattle’s Music Venues, book by Jolie Dawn Bergman  p.72
https://books.google.com/books?id=zgw7BAAAQBAJ&pg=PA72&lpg=PA72&dq=giovanni+giglio++theatre+school+of+dance&source=bl&ots=irCk3h5uyl&sig=Gn3Zaf7MvOkaTFs6I1seVUVFxas&hl=en&sa=X&ved=0ahUKEwi5x9L098fYAhUC94MKHfSIAqYQ6AEIMjAC#v=onepage&q=giovanni%20giglio%20%20theatre%20school%20of%20dance&f=false

Sad to say, I have also found obits for:
Mary Flanagan, who taught for the Giglios in the early years of this school
http://www.legacy.com/obituaries/seattletimes/obituary.aspx?n=mary-b-flanagan&pid=15667919

Gregory Steven King who danced professionally with the Joffrey Ballet and much more
and began his training at the Theatre School of Dance
http://www.legacy.com/obituaries/seattletimes/obituary.aspx?pid=2452753

And a web site for Betsy Haug who has dementia but was a prominent dancer, teacher and choreographer with jazz dance being her specialty.
https://www.gofundme.com/6x-helpbetsy
https://www.ibdb.com/broadway-cast-staff/betsy-haug-1220

Any contacts and whereabouts of other Giglio dancers would be much appreciated.  This could possibly develop into a book. 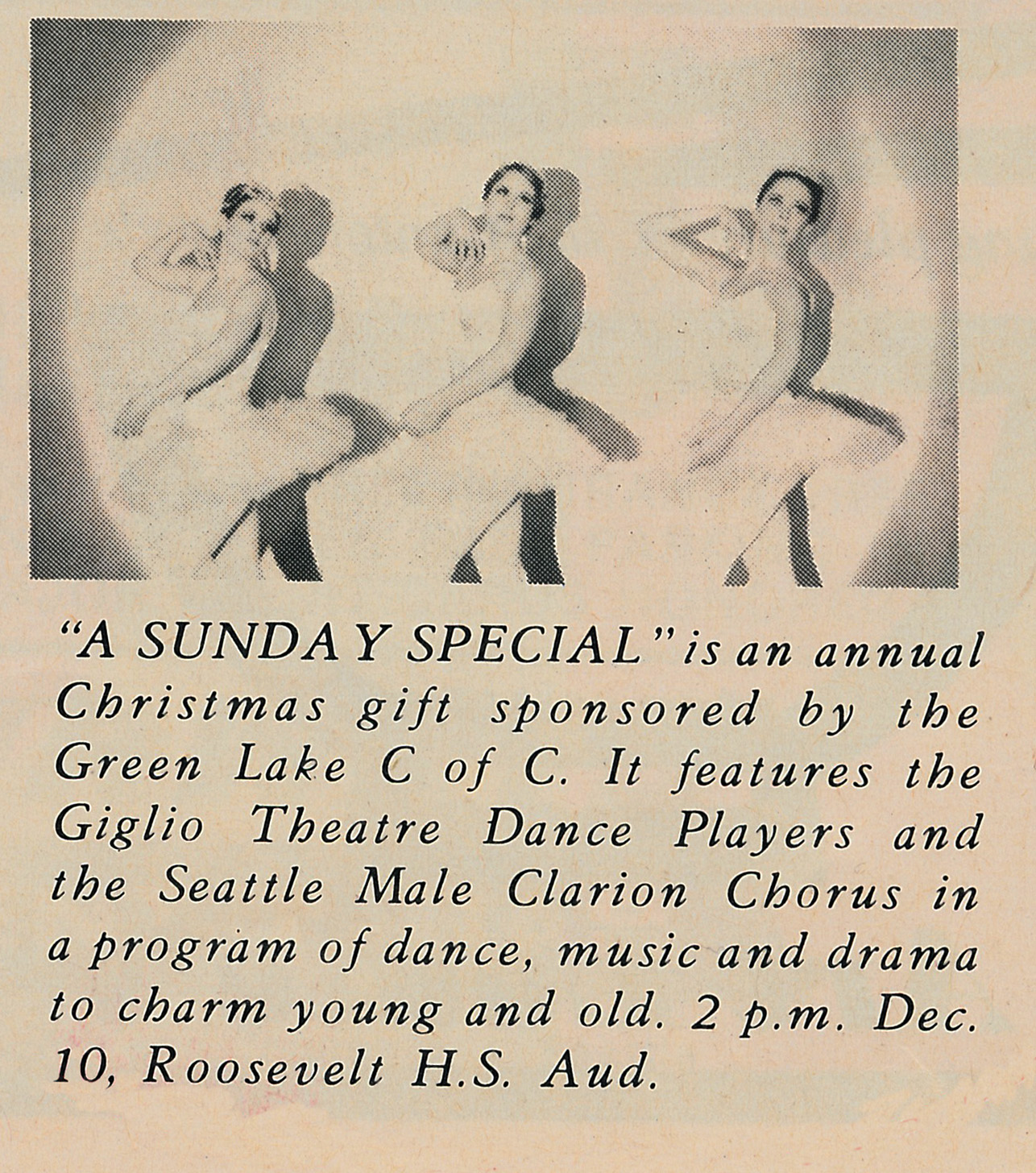